Signs of Grooming in the Workplace 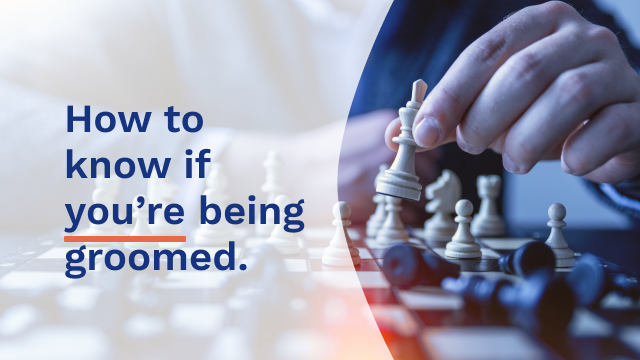 You may have heard the term as it applies to children, but adults can also groom other adults – even at work.

By definition, grooming is when someone builds a relationship, trust and emotional connection with someone so they can manipulate, exploit and/or abuse them.

It can be difficult to tell whether you or someone you know is experiencing grooming. In most cases, the victim has no idea it's even happening until after the fact. However, adult grooming does happen, and there are a handful of telltale signs to be aware of.

Think this might be happening to you?
Speakfully was created because of our CEO, Jana Morrin's, grooming experience of her own.
Her door and ears are always open as a safe space for you to talk about your story with someone who really gets it.

Grooming typically starts off with friendship. This usually means getting to know them personally by inquiring about one's life outside of work, where they like to hang out, and obtaining contact information like phone numbers, personal email addresses or social media handles. These may seem like normal social interactions (and in most cases, they are), but that's exactly why the grooming process is so difficult to detect.

Note: we all have friends at work –  and what we mentioned above can be completely appropriate. But be on the lookout for anyone trying a little too hard to make it into your circle.

Once a friendship is established, the offender will work to gain the trust of its victim, often through secret-sharing or offering help. For example, picking up one's mail without being asked or repeatedly paying for lunch and/or coffee could indicate a deeper motive. The offender may also share "top secret" information that only the target can know (and in many cases, shouldn't know), then expect these things to be reciprocated to even the playing field.

This is where things get a little more alarming. After trust and friendship is established by the offender, the victim will likely experience "threat-gauging." This is when the offender deliberately uses behavior to see how their potential target will react, and thus, gauge how accessible they are to manipulation or other abuse. During this phase the offender may also gauge the relationships its victim has, such as how close they are with family and friends or other people in the office. For example, if the victim lives alone, is new to the area or is far from family, the offender might view this as an opportunity to inflict further abuse without repercussions.

To keep its target as close as possible, groomers will begin to isolate them from family, friends and colleagues. While it seems like this type of behavior could be obvious to identify, that isn't always the case. The offender will be tactful in their approach, using compliments, favors or expressing a need for companionship. Phrases like "I'm worried you don't like me anymore" or "I just feel so connected to you" might be used to reel their targets closer. It's important to understand this behavior is one of the groomer's ways of executing control and influence over its target.

Now we've reached the phase where the offender will use its target for their own needs or personal gain. While grooming is often associated with sexual abuse, it can be as simple as filling an emotional need. For example, a boss grooming a direct report to fill a narcissistic need for superiority. When a target fights back, or confronts their offender about what is taking place, the groomer will use gaslighting tactics to keep them within their control.

As you can see, grooming is not a simple cut-and-dry technique. It’s a gradual process with the actual abuse occurring months (or even longer) after the relationship begins. Additionally, grooming can happen in-person or online – meaning Zoom, Skype, Slack and other forms of remote communication can just as easily be platforms for grooming to occur at work. It's important to understand the warning signs, as psychological effects of grooming victims can be devastating.

If you see something, say something. To learn more about grooming in the workplace or determine if it's happening to you or someone you know, check out Jana's Story, a blog series written by Speakfully's CEO who went through her own grooming experience.

You can also help employees come forward about grooming or other workplace concerns by giving them a safe place to speak up. That's Speakfully – learn more here.