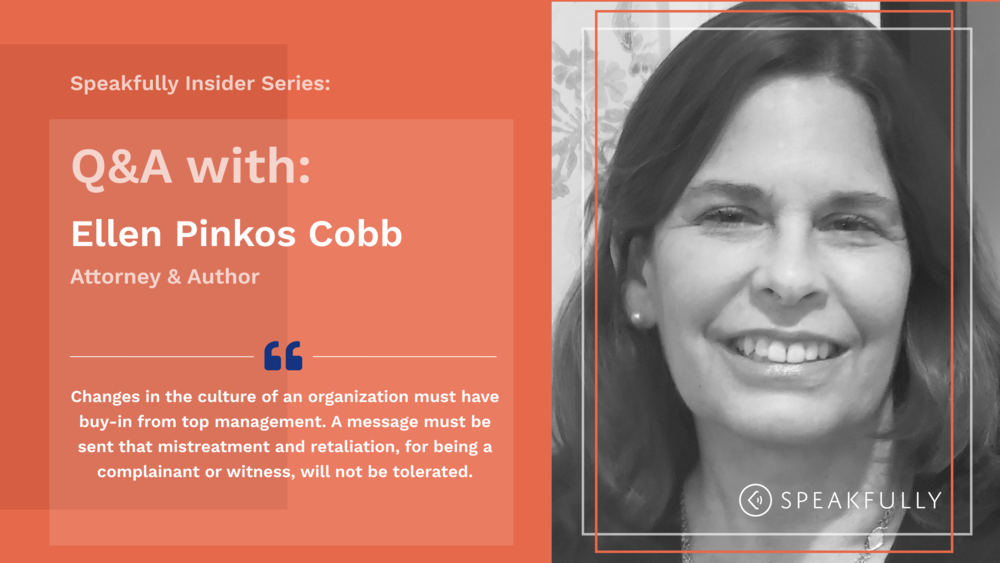 Hi, I’m Ellen Pinkos Cobb- I’m an attorney, author, and subject matter expert on international bullying and sexual harassment from Boston, MA. I have spent much of the past 11 years of my career researching and writing about workplace bullying and harassment laws and developments around the world.

After many years working for the MA Civil Rights Agency (the Massachusetts Commission Against Discrimination (MCAD)) I began working in international occupational health and safety and learned there are laws against bullying in many other countries. I became fascinated as I had not been aware of workplace bullying (for good reason- it is not illegal in the US). The laws and prohibitions were so similar to discrimination laws, but not based on protected class and addressed as part of an employer’s duty of care. I was hooked; fascination led to my book Workplace Bullying and Harassment: New Developments in International Law (2017) followed by International Sexual Harassment Laws for the Multinational Employer (2020). Routledge has published both books.

I now devote much of my professional time to tracking and advising on workplace bullying and harassment developments around the world, with hope that US workplaces will someday (soon) catch up and learn that repeated, severe abuses of power at work significantly damage organizations, employees, and even bystanders.

What was the driving force for you to pursue a career in equal rights and social justice?

I have pretty much always believed in fair and equal treatment and hated seeing or reading about people being treated badly. For better or worse, I’ve always been an empathetic person- it is in my wiring. I’ve always done a lot of novel reading; I think that helps me see and understand different perspectives and injustice.

I was lucky enough to have a summer internship at the MCAD (way) back in law school and then worked as an Equal Employment Opportunity investigator for a Federal government contractor right after graduating law school. So, early on, equal rights and fairness at work, was my primary legal interest.

How would you describe workplace issues involving mistreatment decades ago to the current environment?

Decades ago much workplace misconduct seemed to be viewed as “that’s just the way it is” or “it’s an old boys network” or it’s just horseplay. It was rare for those harassed to speak up or have a mechanism for complaining of inappropriate treatment.

Gradually the world and the workplace has come to acknowledge that this racism, sexism, and other misconduct is wrong and damaging. Victims and targets have become more comfortable speaking out, whether internally or though channels such as social media. Studies have been done on the harm to targets/victims, the organization, and even bystanders. Fortunately, consumers, clients, and customers have also driven some of this change, through caring about the workings of companies they do business with; transparency in all aspects has slowly become demanded.

Based on this, I would describe the current environment as slowly progressing but with a good way to go in terms of valuing human sustainability and treating workers fairly. In much of Europe, the employer has a duty to keep employees both physically and psychologically safe at work The US needs to make more progress in this area.

Describe the typical series of emotions a victim of mistreatment experiences.

From my work at the MCAD, from research, and from the US Workplace Bullying Institute, there may not necessarily be a ‘typical’ series of emotions. The series of emotions depends on the severity of the mistreatment, as well as the individual’s make up, past experiences, and current circumstances.

That being said, a target may experience emotions including hurt, rejection, anger, anxiety, confusion, self-doubt, self-blaming, feeling a bit crazy (if not aware of what workplace bullying is) helplessness, panic attacks, stomach, back, and headaches, sleeplessness, suicidal ideation, sucide attempts, and in a few tragic cases, suicide.

In your opinion, what attributes to the growing proportion of workplace mistreatment cases becoming public?

What steps do you believe will help in making workplace mistreatment and fear of retaliation a thing of the past?

Changes in the culture of organizations, but must have buy-in by top management. There must be an acknowledgement by top managers that harassment is occurring and is damaging. From there, a message must be sent through the entire organization that mistreatment and retaliation, for being a complainant or witness, will not be tolerated.

From this, there must be a complaint system, which employees can trust, in place. In Belgium, there is a confidential counsellor and/or prevention advisor--someone who an employee can go to with workplace mistreatment complaints. Here, there is HR, which is part of the company --not surprisingly, under reporting is chronic. So this step must be worked on to make workplace mistreatment and retaliation a thing of the past.

If you could sit down with a historical figure to discuss equal rights and social justice, who would it be, what would you discuss, and why?

Realize this answer will sound like a cliche, but RBG. This is why it is not a cliche: I was fortunate to hear her in January 2018 at the synagogue I attended growing up. More than that, there are personal reasons: my mother was just a bit older than RBG, both were smart, Jewish, first generation, not privileged women who grew up in NY City. That makes RBG feel familiar in some way. So I would start there and ask her what she thought about workplace bullying --would she want ALL workers treated respectfully regardless of protected class or not, what was her take on changes in the US workplace over her lifetime, how can we bring about more respect in the workplace. 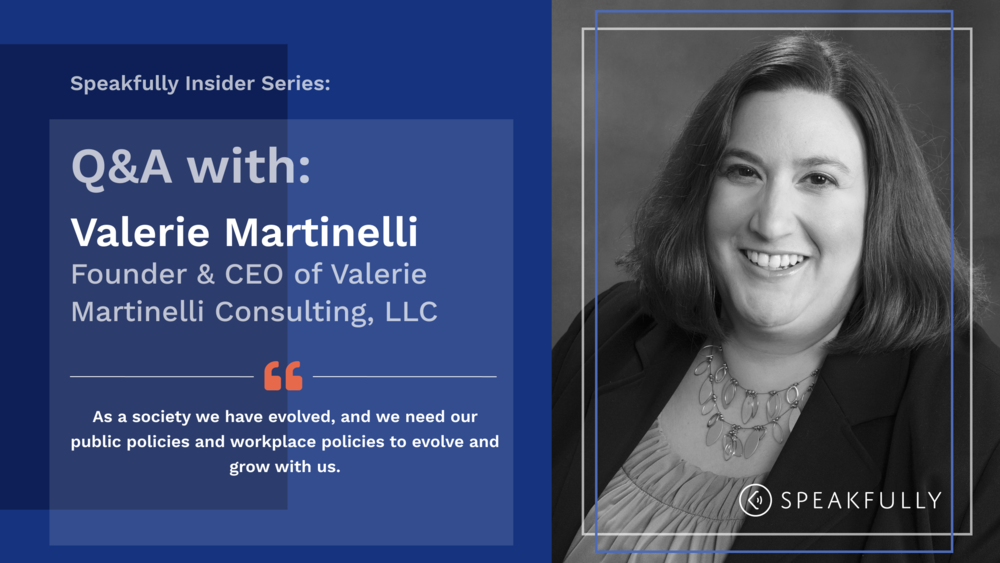 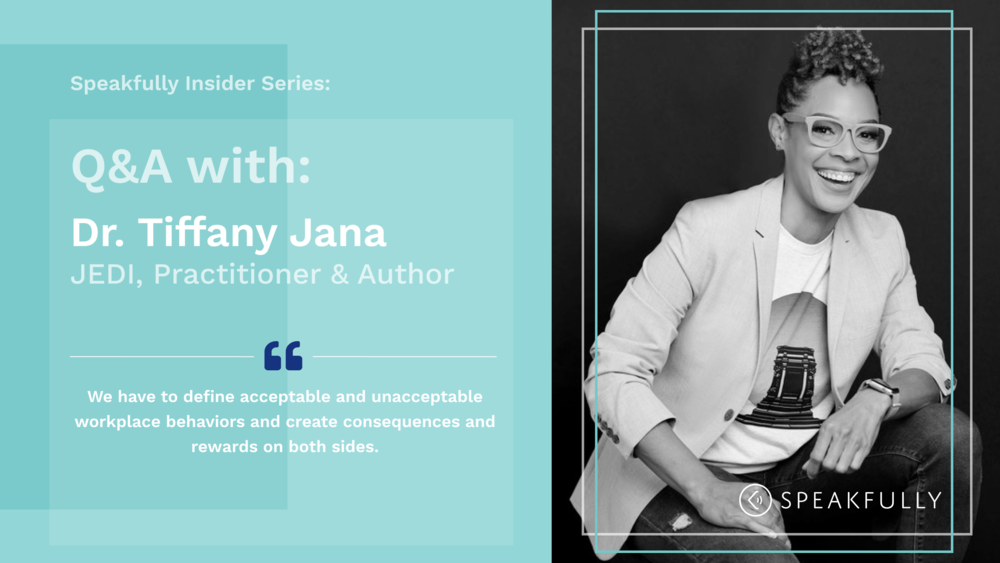 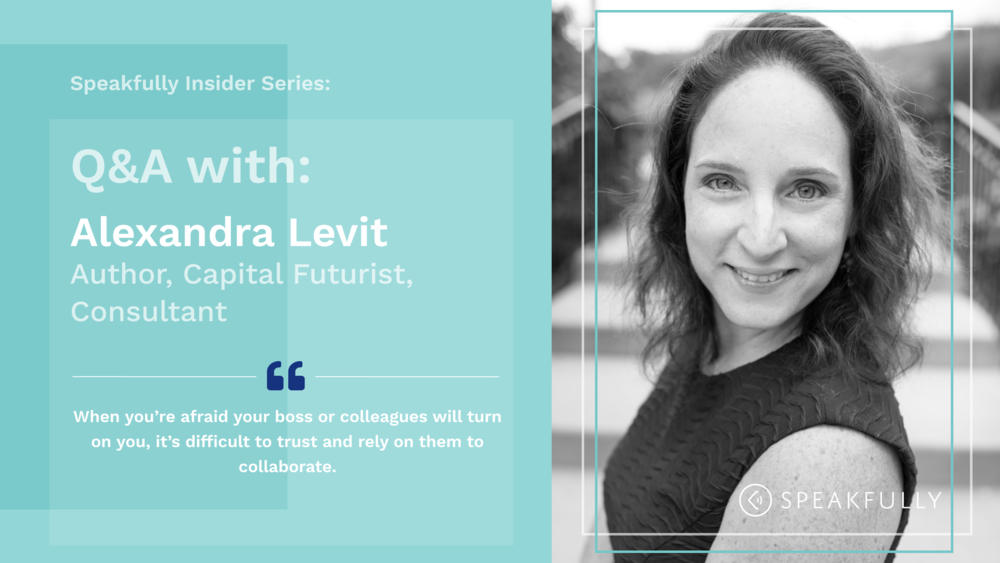